Frank Herbert – Dune
Normally I wouldn’t bother writing about group selection because as an idea it is dead and gone as far as I, and most evolutionary biologists are concerned. However, I started reading this blog about group selection. I thought I would write about group selection for a few reasons. Firstly, it’s on my mind at the moment so hopefully the post will be quite good. Secondly, the link provides a good “other side of the story”, so hopefully a couple of readers might immerse themselves in the debate. Finally, many members of the public might intuitively see group selection as plausible. This is not something to be ashamed of. A certain Charles Darwin thought it was the best explanation for some social behaviour. Do a biology degree however, and group selection is blasphemy. Because of this it is easy for biologists to lose sight of what an intuitive idea it is.

Two groups of people go into two shops. One of the groups are well versed in the wonderful British institution that is queuing. People politely accept their position in the queue for the tills and everyone gets served quickly and efficiently. In the other shop it is a free-for-all (you might have experienced this in France/Italy. It is very disconcerting.) and because of all the scrummage everyone actually takes longer to pay. However, if anyone in the free-for-all shop tried to form a queue, they would be the last to pay. In the polite shop, if someone skipped the queue they would get their goods quicker than if they joined the queue, but this would increase the time it takes for everyone else to do their shopping. This is the crux of group selection. Group selection says that a group with a behaviour that is for the common good will reproduce faster than those without this behaviour. As long as the selection between groups is stronger than the selection within groups the cooperative behaviour will spread through the population, even though anyone who behaves selfishly will do better than the rest of their group. 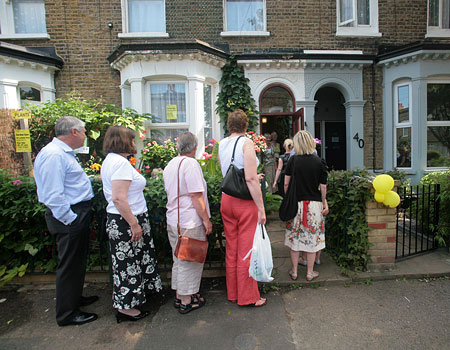 The counter argument is that whenever an individual is selfish in a non-selfish group (pushing to the front of the queue), this selfish behaviour will spread through the group. Soon there will be no cooperative groups to even compete with the selfish groups. The selection within groups is stronger than the selection between groups.

Furthermore, the “group” is a very fuzzy concept. Since the 60s the idea of an individual has been very carefully scrutinised to the point where an individual or even a cell counts as group. What used to be a group is now a lose nit group. Bigger units, all the way up to the entire earth, can be considered losely bound groups. Everything down to chromosomes can also be considered a group, albeit a tightly nit one. The gene on the other hand has a quite precise, consistant definition. This just leads to more mistakes and fuzzy thinking. Most group selection models consider selection between groups and compare it to selection between individuals. If selection between groups is stronger than selection between individuals group selection can occur. But individuals are now another type of group. So we need to consider individuals as groups as well as our original group (as kin selection essentially does). Eventually you end up considering genes to be “individuals” and everything else a group. Then you have a gene level selection model, albeit in an interesting social setting. Why not start with the gene level model? The maths ends up being easier and you can’t make mistakes.

I intend to write more on the definition of an individual soon. Until then I hope you read DS Wilsons blog and see what you think. The section on Dawkins is an interesting insight into the slightly more personal side of science.